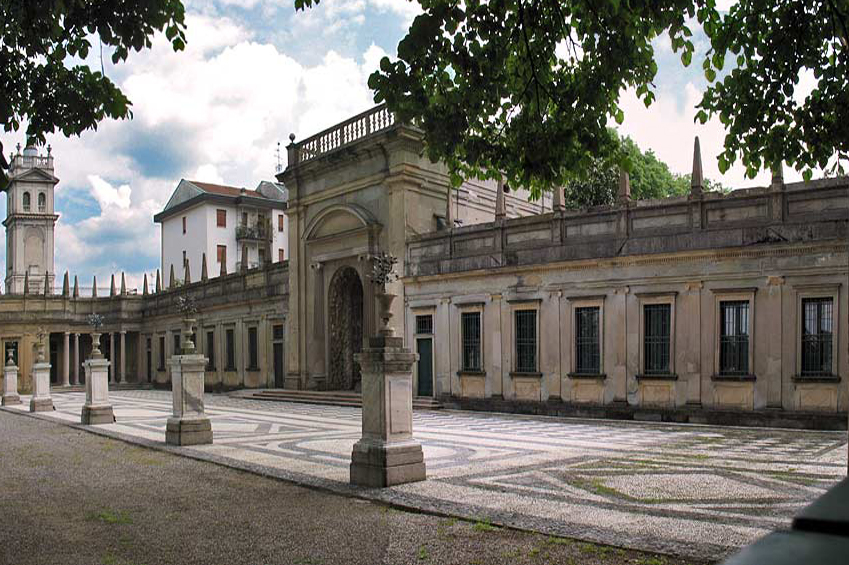 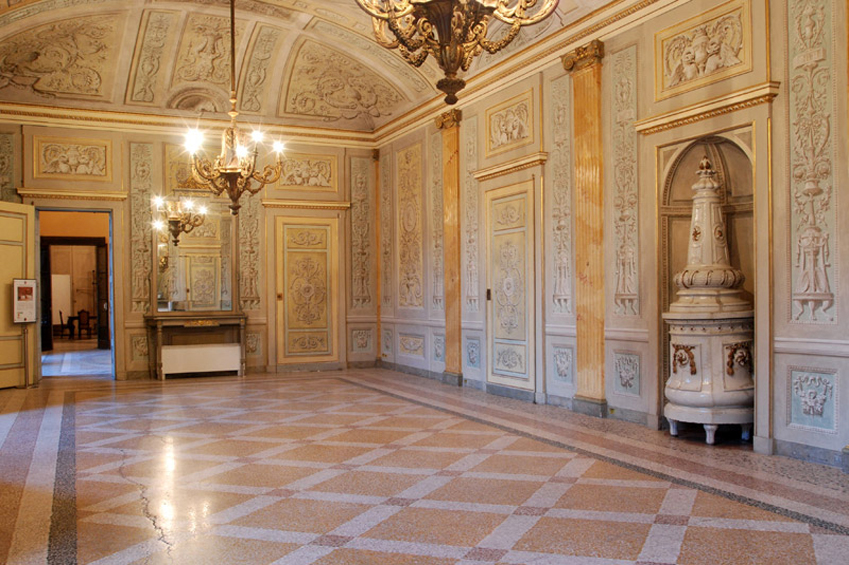 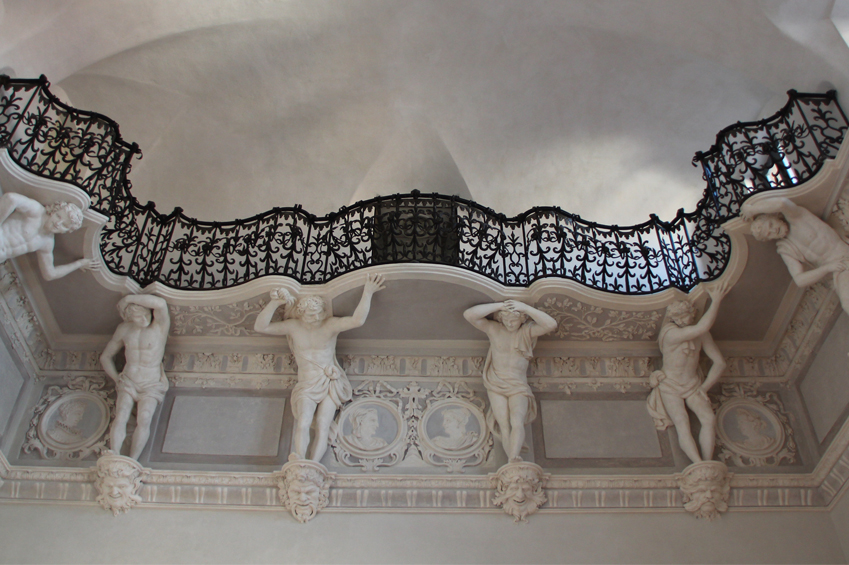 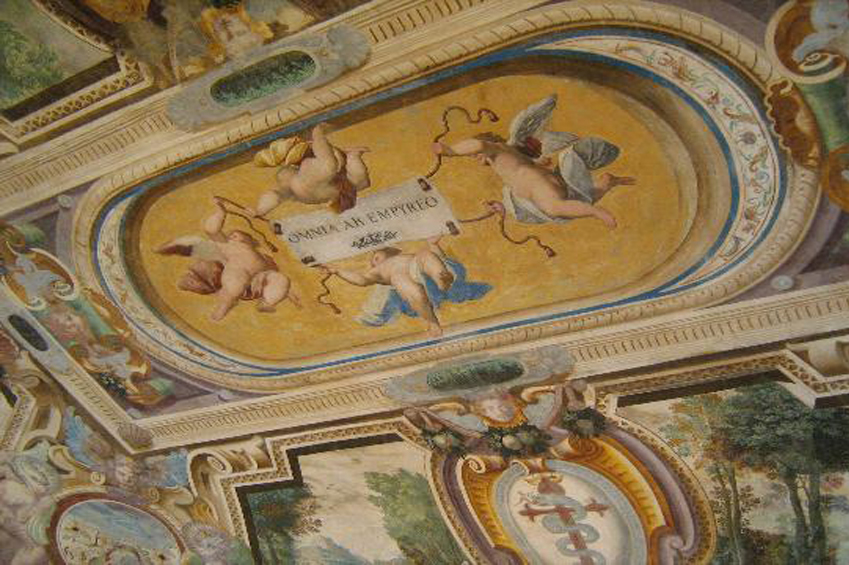 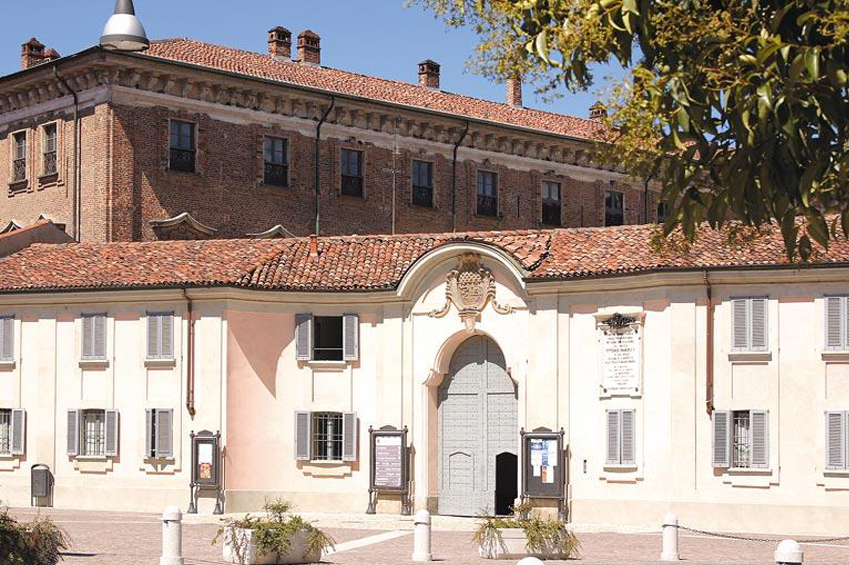 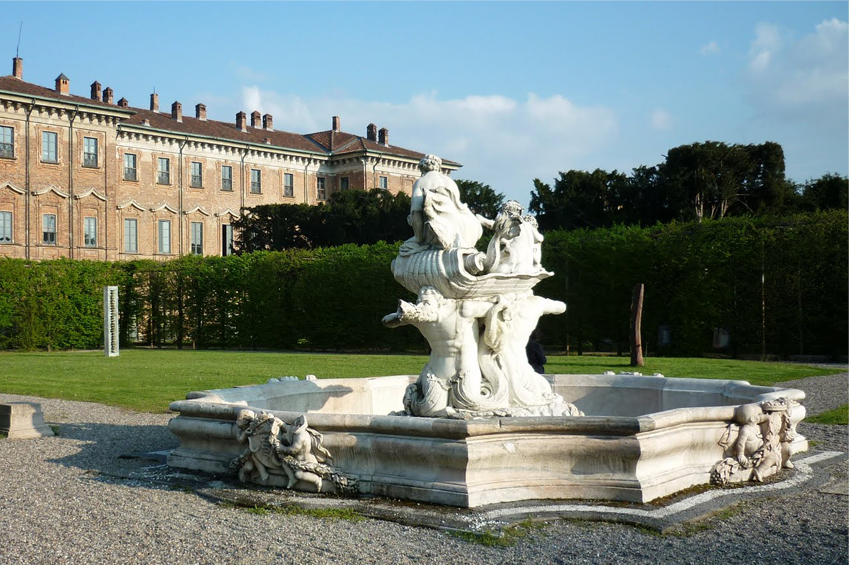 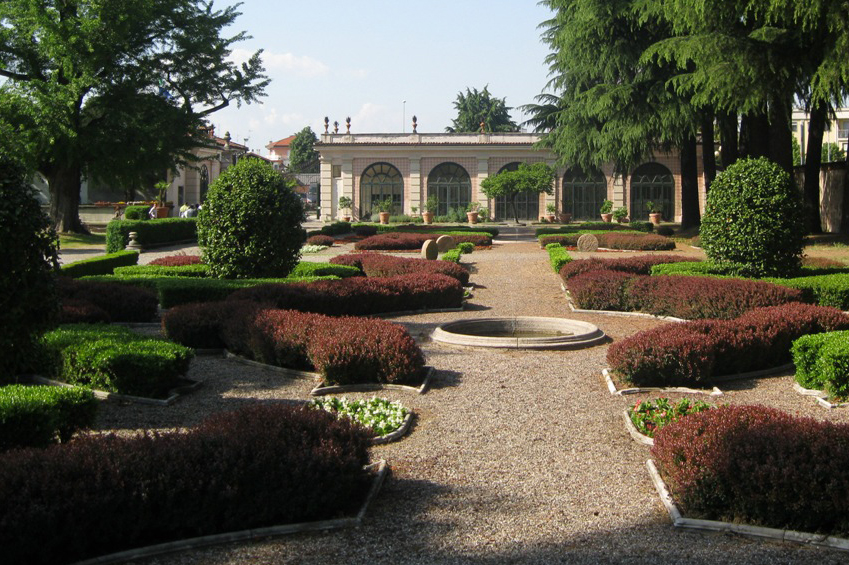 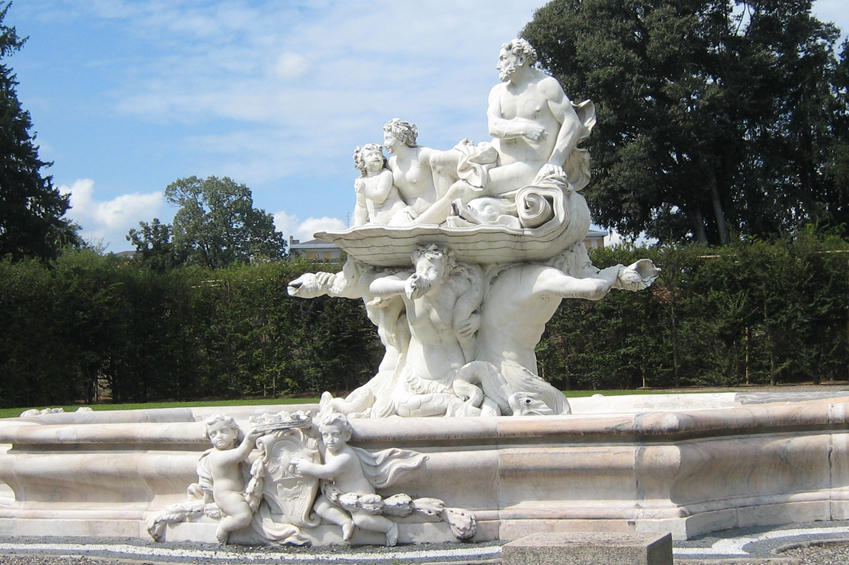 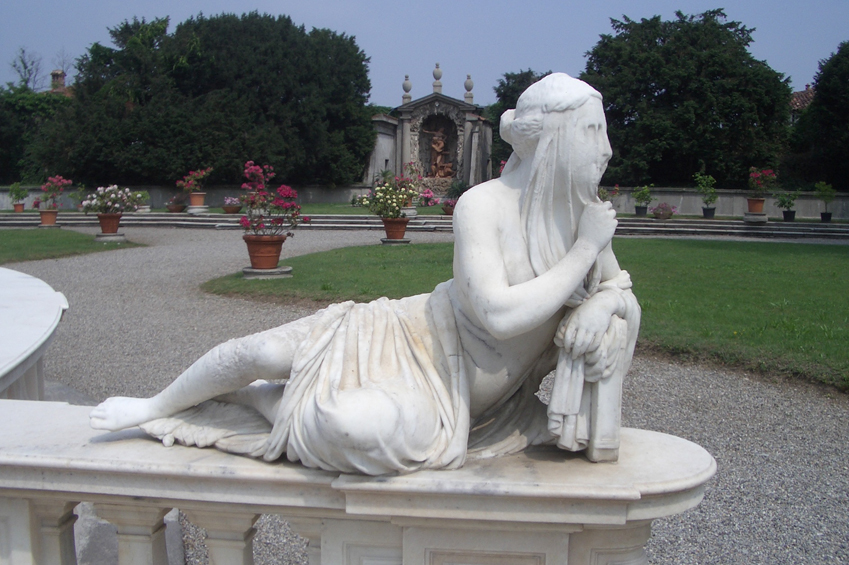 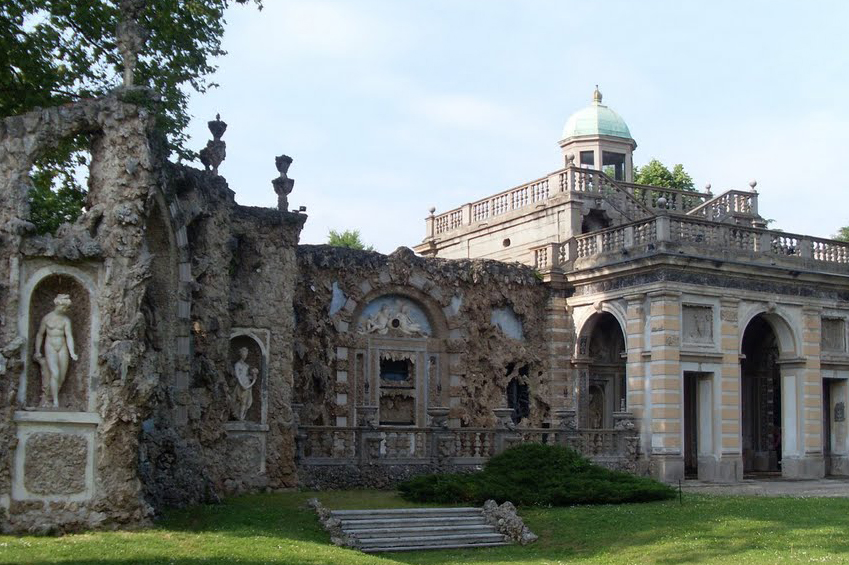 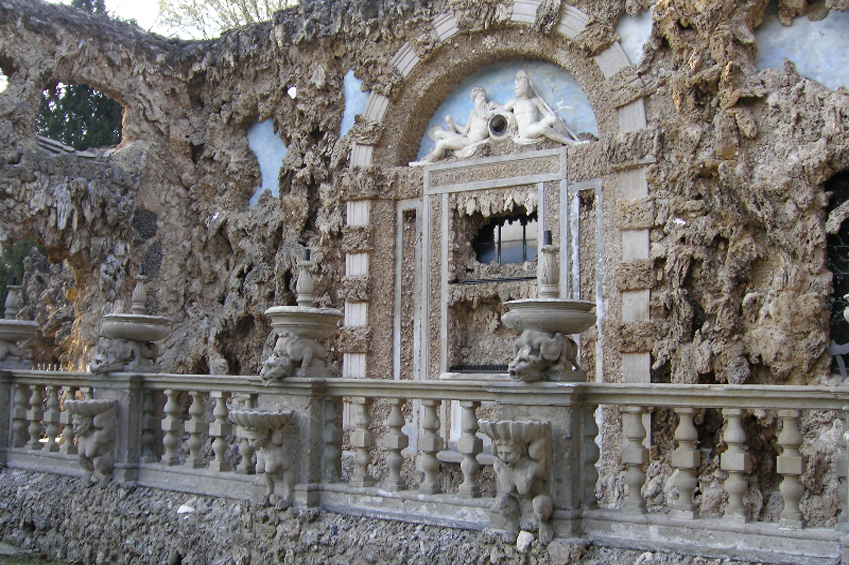 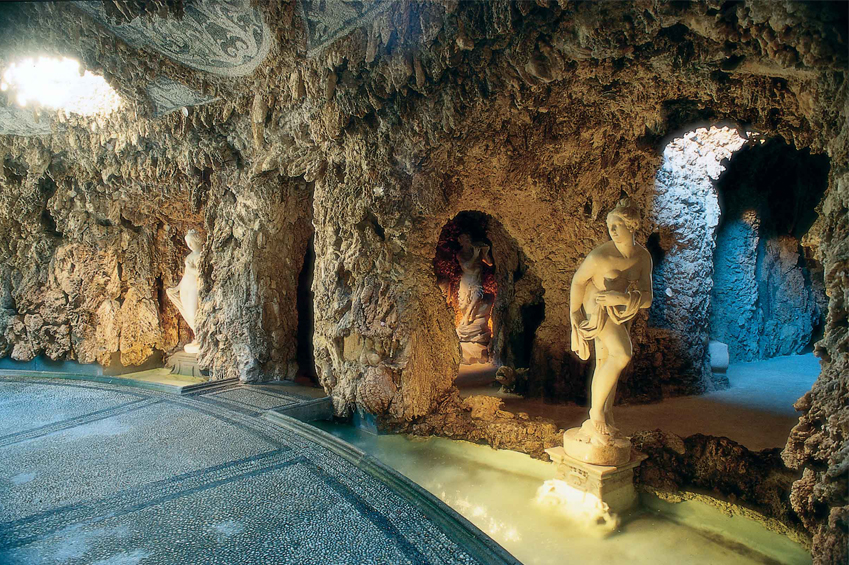 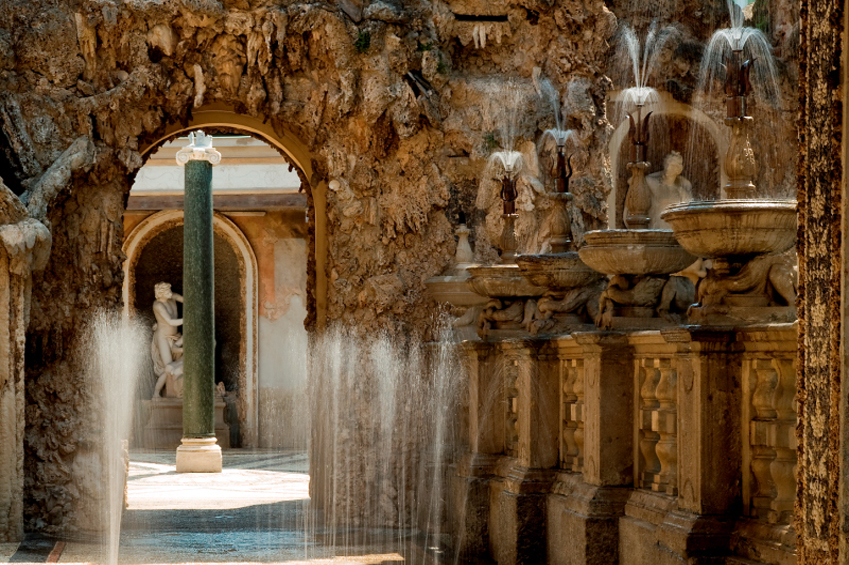 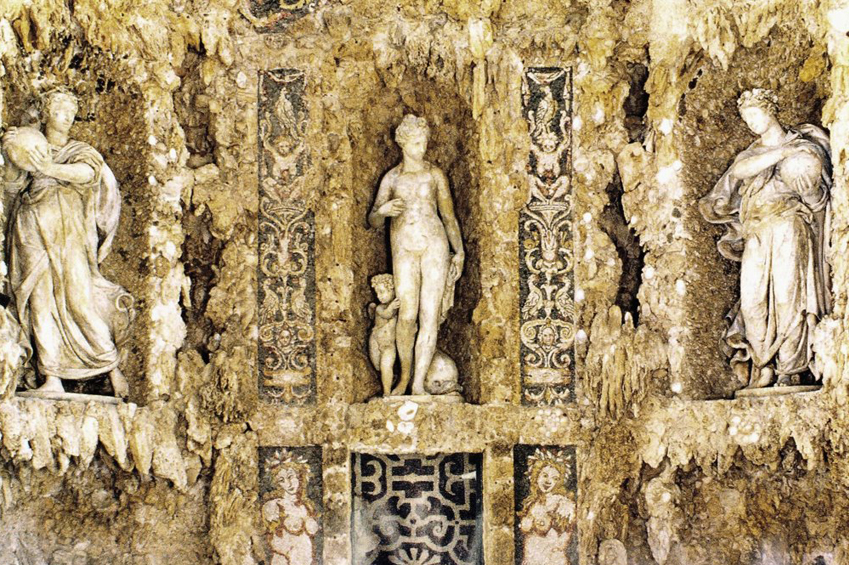 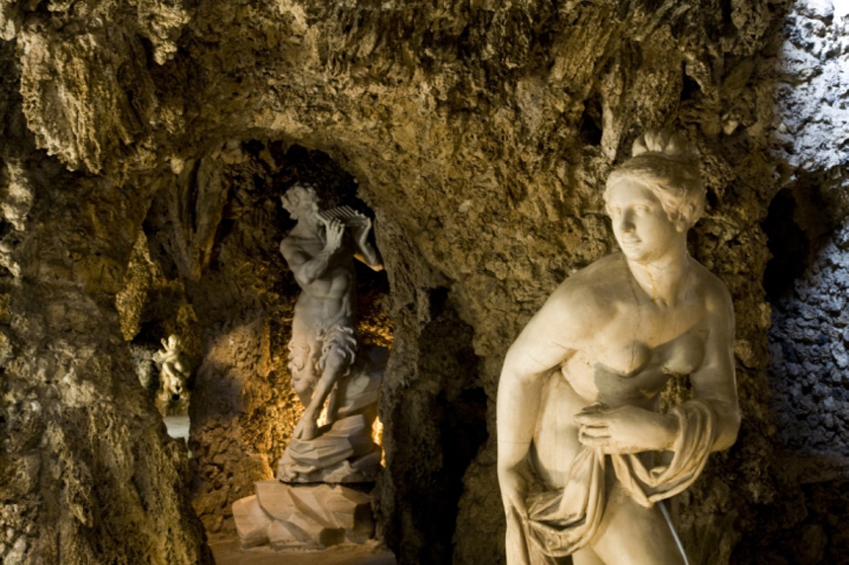 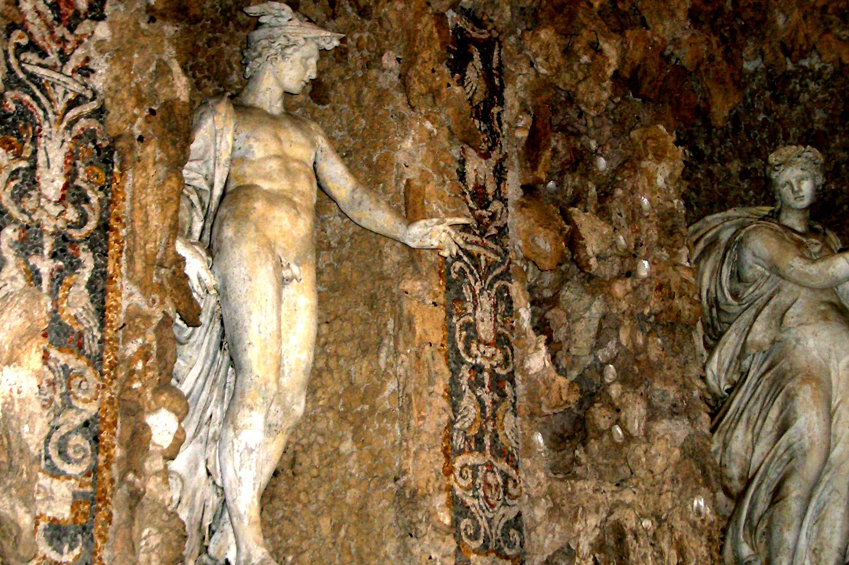 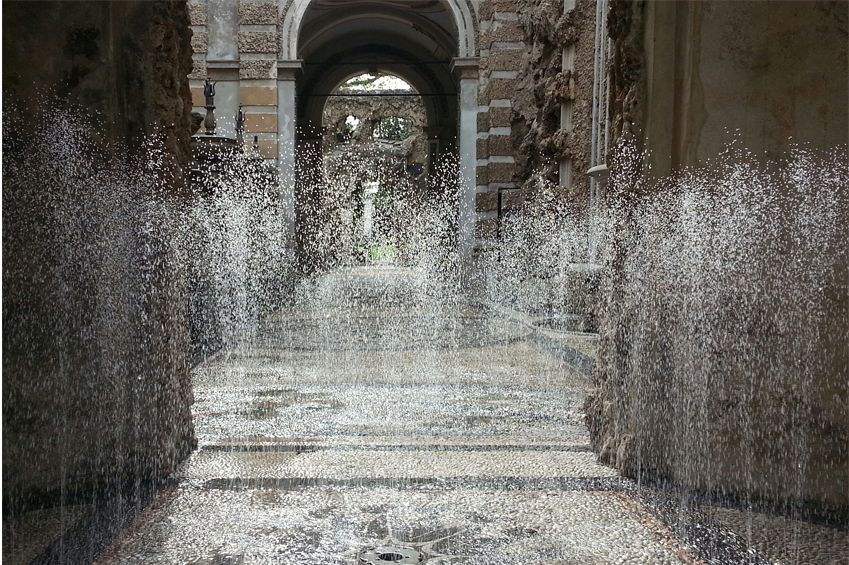 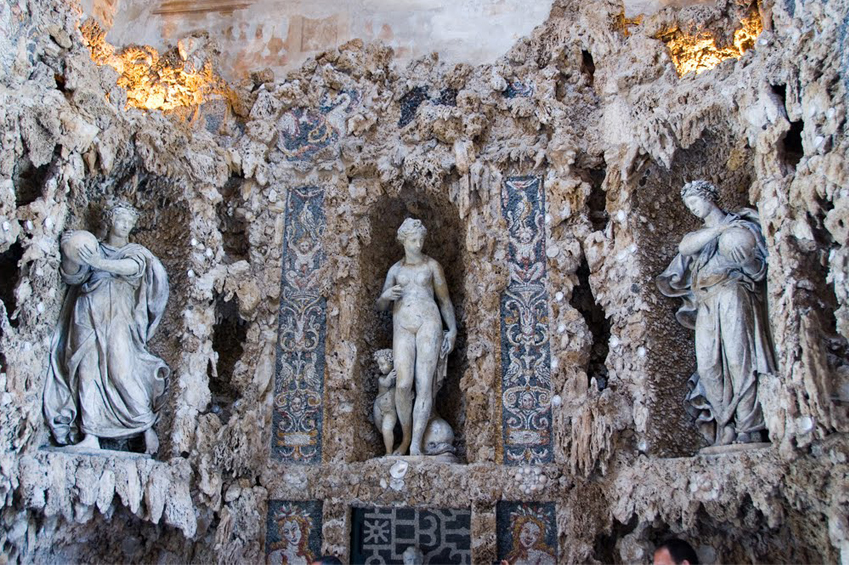 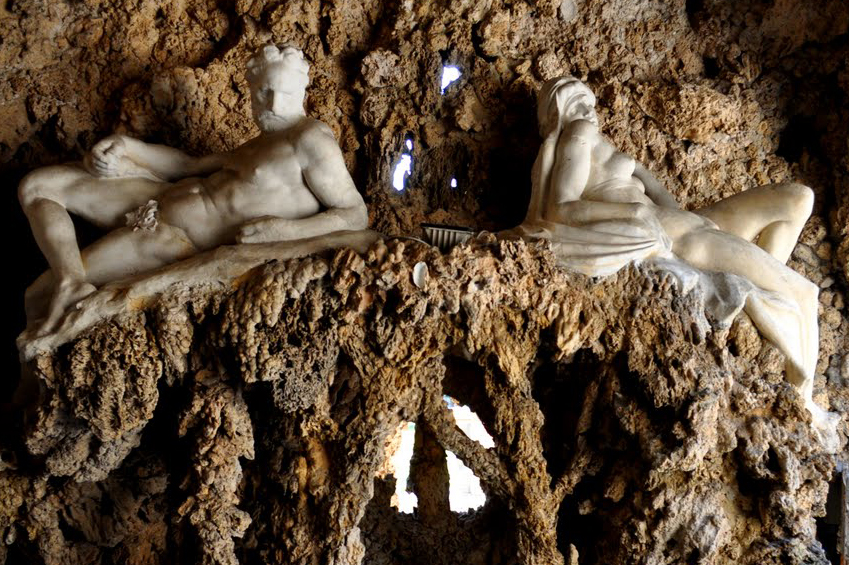 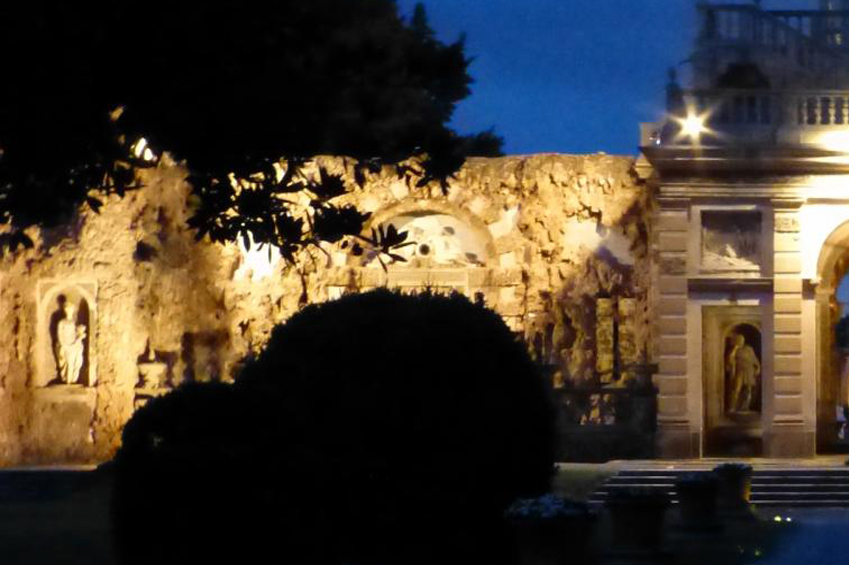 Villa Borromeo Visconti Litta, a garden of delights that blends art, history and entertainment. A jewel to be discovered, including mosaics, statues, frescoes, fountains and water features.

Something of which we can not do without

We could just not forgot to present this treasure that we have just out of our door! We are proud to live near this jewel and we are sure that  it worth visiting the halls of the sixteenth and eighteenth century buildings of Villa Borromeo Visconti Litta and its park located in Lainate, a few steps away from the Fair Grounds and the center of Milan.

The creator of the entire complex was Pirro I Visconti Borromeo, who, inspired by the villas of Tuscany around 1585. The Teresian Cadastre (1721) shows how the system of the complex remained essentially unchanged until that date. The Marquis Pompeo Litta inherited the villa in 1750 and carried out a large scenic works of the gardens, multiplying the effects of perspective, creating scenes and backdrops, building from scratch the front of the Nymphaeum.

At the beginning of the nineteenth century, transformed the north / west garden, botanical experiments had great development in the greenhouse until the decline of the Litta family active part in the movements for the unification of Italy, led to the sale of the villa to the State in 1866. The monument, after successive transfers of ownership, in 1932 it was purchased by Alberto Toselli, who made some renovations and reactivated the water features games.

The Second World War marked the total decay of the Villa which lasted until 1971 when it was purchased by the Town Council of Lainate. 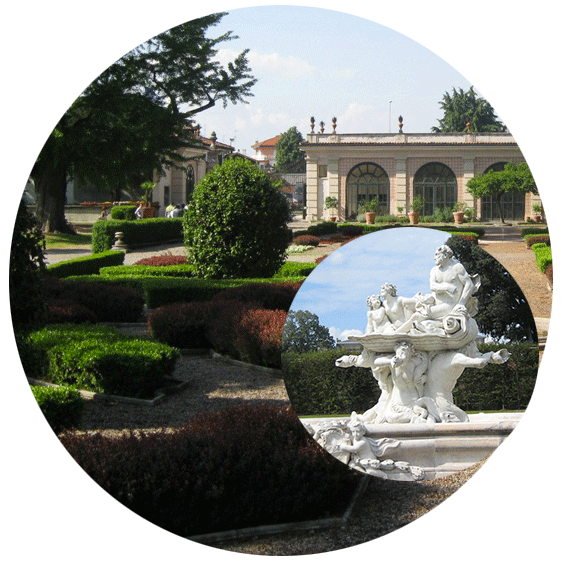 The most beautiful park

The visit of the building unfolds in a time span from the sixteenth to the eighteenth century; the perfectly preserved interiors reveal frescoed walls and ceilings; mosaic floors and detailed decorations that reveal the visitor the nobility habits of the time.

Court of Honor: Upon entering the main courtyard on the left shows the eighteenth-century stately building in brick. This imposing reduces the value of the older building with two floors and set on a porch architrave supported by columns of pink granite arranged in pairs. The entrance hall on the right side of the coaches gave access to the stables.

Palace of the eighteenth century or the New Fourth: With the beginning of the eighteenth century the villa of Lainate is enlarged by the Litta family with the addition of the western part of the building in brick in sight. The new building, the height of three floors, has a slight U-shaped plan facing the natural theater, while the side facing the court of honor shall, on the ground floor, a porch with three arches. Inside the building are large rooms that play well with the function which the villa was intended. On the ground floor most of the salt has frescoed ceilings. The main floor features the great Hall of Music, the height of two floors, with beautiful wrought iron balconies for the musicians.

The garden is actually a park of about three acres, was probably from the beginning divided into four compartments marked by green citrus trees in pots. Its expansion and its extension stood on the two main axes (north-south, east-west) along which make significant and costly structural work, where are placed fountains of Neptune and Galatea, built the greenhouses, extended and improved the irrigation system and Water features Games.

On either side of the Exedra with the niche group of sculptures in terracotta of the “Rape of the Sabine or Persephone” are placing two cold greenhouses intended for winter storage of citrus fruits and henceforth two hothouses for exotic species. In 1840 the botanist Linnaeus Tagliabue drawn up the great variety of plants spread around the park: pineapple, banana, coffee, tamarind, palm trees, and even orchids, hibiscus and gardenias.

This building, built between 1585 and 1589 and designed by Martino Bassi, is rectangular strictly symmetrical.

The south face of the Nymphaeum is decorated with stucco statues; two stone balustrades leading to the atrium of access to the grotto and its octagonal shape is a hub, called the Atrium of the Four Winds.

The visit of outdoor surroundings is still an immediately engaging experience. In fact, entering inside the great Nymphaeum, the visitor is surprised by the “water features games” commissioned by Pirro I Visconti Borromeo, who, in the sixteenth century, wanted to “delight” his guests with this rich texture of artificial caves decorated with stalactites in tufa, shells and semi-precious stones, rooms covered in black and white pebble mosaics or paintings.

The hydraulic system, which caught the brilliant idea of the military engineer Agostino Ramelli, used the mechanics of a well and the hydraulic force of a stream or a waterfall, as commonly happened in “buildings of coolness” of the time.

The galleries and balustrades marching toward the elegant Pronaos, the show spectacular Atrium of the Four Winds, the Hall of the Egg and the caves with their magical caves waiting to reveal malicious visitors as is the case for more than four centuries.

Still active today, the splashing water features please the eye of the curious visitors and show how the nobles used to spend their time in the hot summer days.

Historical reenactment by the Friends of Villa Litta. Path in the the Nymphaeum accompanied by characters in historical costumes. Among mosaics and fountains, a curious and intriguing journey through centuries of history linked to the greater glory of the Villa: the artistic commissions of Pirro I Visconti Borromeo, in the fashion of the early twentieth century. Costumes, sets, readings, activities and a fireworks to evoke in the viewer the atmosphere of the times.

The Park is open to the public and can be visited throughout the year. The Nymphaeum and the Italian Garden are open seasonally and are available upon reservation besides some special openings as part of the “Open Villas”  initiative.
Ask for Villa Litta Packages!

Some of our Shopping & Glamour ideas 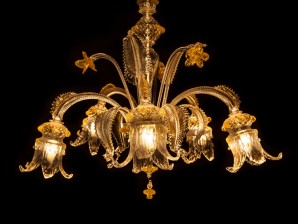 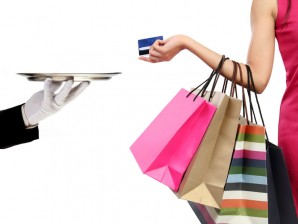 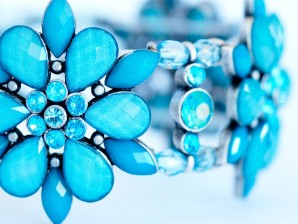 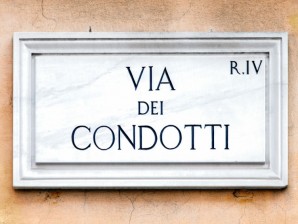 BE READY TO TRAVEL WITH ITALY CREATIVE !

Italy Creative offers unforgettable, tailor-made luxury services across Italy, ensuring a travel experience that stands apart from the rest. We make sure you live up to your expectations and create unforgettable experiences. Learn more about us!
______ Happy Birthday!   ______

This is the place! The place to learn more about the Italian lifestyle, as well as hints and tips about anything you may need traveling throughout Italy. Start here!

By closing this banner, scrolling this page or by clicking any of its elements consent to the use of cookies. Accept

This website uses cookies to improve your experience while you navigate through the website. Out of these cookies, the cookies that are categorized as necessary are stored on your browser as they are essential for the working of basic functionalities of the website. We also use third-party cookies that help us analyze and understand how you use this website. These cookies will be stored in your browser only with your consent. You also have the option to opt-out of these cookies. But opting out of some of these cookies may have an effect on your browsing experience.
Necessary Always Enabled
Necessary cookies are absolutely essential for the website to function properly. This category only includes cookies that ensures basic functionalities and security features of the website. These cookies do not store any personal information.
Non-necessary
Any cookies that may not be particularly necessary for the website to function and is used specifically to collect user personal data via analytics, ads, other embedded contents are termed as non-necessary cookies. It is mandatory to procure user consent prior to running these cookies on your website.
SAVE & ACCEPT